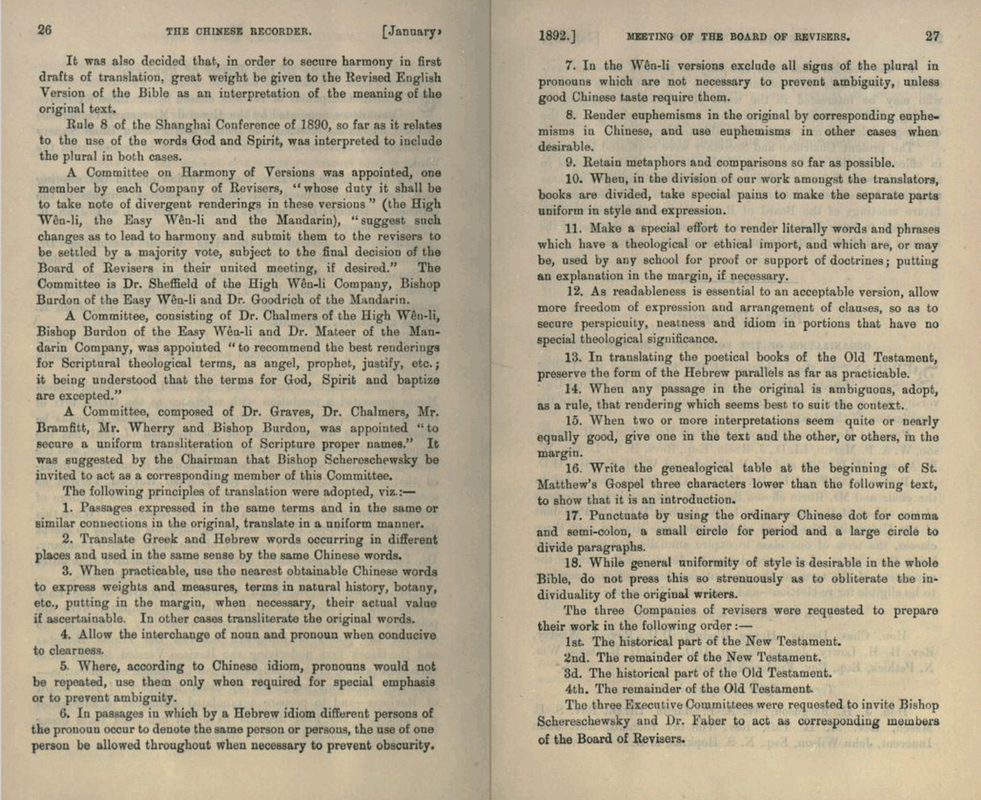 1. Passages expressed in the same terms and in the same or similar connections in the original, translate in a uniform manner.
2. Translate Greek and Hebrew words occurring in different places and used in the same sense by the same Chinese words.
3. When practicable, use the nearest obtainable Chinese words to express weights and measures, terms in natural history, botany, etc., putting in the margin, when necessary, their actual value if ascertainable. In other cases transliterate the original words.
4. Allow the interchange of noun and pronoun when conducive to clearness.
5. Where, according to Chinese idiom, pronouns would not be repeated, use them only when required for special emphasis or to prevent ambiguity.
6. In passages in which by a Hebrew idiom different persons of the pronoun occur to denote the same person or persons, the use of one person be allowed throughout when necessary to prevent obscurity.
7. In the Wên-li versions exclude all signs of the plural in pronouns which are not necessary to prevent ambiguity, unless good Chinese taste require them.
8. Render euphemisms in the original by corresponding euphemisms in Chinese, and use euphemisms in other cases when desirable.
9. Retain metaphors and comparisons so far as possible.
10. When, in the division of our work amongst the translators, books are divided, take special pains to make the separate parts uniform in style and expression.
11. Make a special effort to render literally words and phrases which have a theological or ethical import, and which are, or may be, used by any school for proof or support of doctrines; putting an explanation in the margin, if necessary.
12. As readableness is essential to an acceptable version, allow more freedom of expression and arrangement of clauses, so as to secure perspicuity, neatness and idiom in portions that have no special theological significance.
13. In translating the poetical books of the Old Testament, preserve the form of the Hebrew parallels as far as practicable.
14. When any passage in the original is ambiguous, adopt, as a rule, that rendering which seems best to suit the context.
15. When two or more interpretations seems quite or nearly equally good, give one in the text and the other, or others, in the margin.
16. Write the genealogical table at the beginning of St. Matthew’s Gospel three characters lower than the following text, to show that it is an introduction.
17. Punctuate by using the ordinary Chinese dot for comma and semi-colon, a small circle for period and a large circle to divide paragraphs.
18. While general uniformity of style is desirable in the whole Bible, do not press this so strenuously as to obliterate the individuality of the original writers.
返回〈和合本．翻譯方針〉